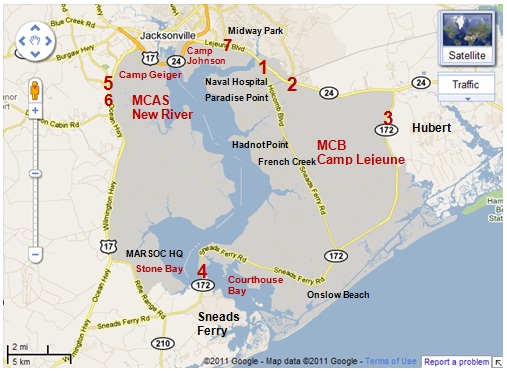 The Marine Corps Base Camp Lejeune known as the “Home of Expeditionary Forces in Readiness” is the home to more than 40,000 Marines and sailors. Adjacent towns are Jacksonville, Hubert, and Sneads Ferry.

Camp Lejeune’s Gates.  As shown in the map above, Camp Lejeune currenty has four gates.

Courthouse Bay is located in Camp Lejeune and the home of amphibious assault Marines and vehicles and also home of the Coast Guard’s Port Security Training Detachment,currently known as the Joint Maritime Training Center.

Stone Bay is a satellite facility of Camp Lejeune and home of Weapons Training Battalion.  It is also the headquarters of US Marine Corps Forces Special Operations Command (MARSOC).  Currently MARSOC has 2,200 Marines, Sailors and civilians.  The MARSOC forces are unique in that they are trained as warrior-diplomats, allowing them to operate across a wide range of actions.

Camp Johnson is the Marine Corps Combat Service Support School.  Historically, it was the first training base for black Marines known as Montford Point.  Outside the gate of Camp Johnson is a collection of stunning memorials called Lejeune Memorial Gardens.  The memorials include the Beirut Memorial, 9/11 Memorial, Onslow Vietnam Veterans Memorial and coming soon in 2012 is the Museum of the Marines.

Every year more than 24,000 Marines go through Marine Combat Training at the School of Infantry (SOI) in Camp Geiger.  To enter Camp Geiger today, you must to go through MCAS New River’s front gate.