Onslow County is one of the oldest and largest coastal counties in North Carolina.  It is a diverse county, sporting a landscape of sandy beaches, thick forests, beautiful rivers and historic farmlands. 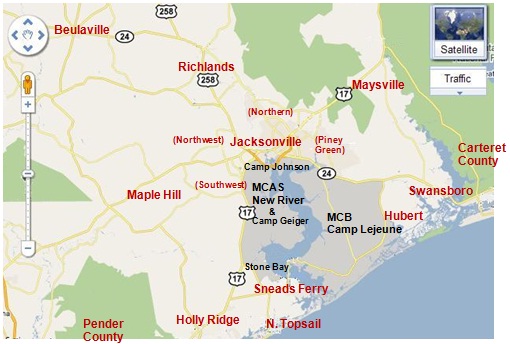 Ranked as one of the safest cities in North Carolina and named by Business Week Magazine as the best city in North Carolina to raise kids, Jacksonville NC is the commercial center of Onslow County and is also home to Marine Corps Base (MCB) Camp Lejeune, Marine Corps Air Station (MCAS) New River, Camp Johnson, Camp Geiger, and MARSOC HQ.  As you can see, Jacksonville is a military-friendly town.  Camp Lejeune covers over 150,000 acres and has become a stable economic force for Onslow County.  Jacksonville is divided into five areas:  City of Jacksonville, Piney Green, Southwest, Northwest, and Northern.  Click here for more information on Jacksonville NC.

Richlands is a farming community with a small-town charm.  You will see crops of tobacco, corn and cotton.  Every September on Farmer's Day, the townpeople get together and celebrate the harvest.  It is also known for its annual crafts fair and antique auto shows in November.  If you want to live away from Camp Lejeune and MCAS New River but still be able to commute to the bases approximately 40 minutes or less, Richlands is for you.  Click here for more information about Richlands NC.

Hubert is a very small town located between Camp Lejeune and historical Swansboro where a variety of restaurants, shops and other businesses can be found.  There is also a public boat ramp allowing access to the Intracoastal Waterway (ICW).  Hubert is close to Onlsow Beach which is aboard Camp Lejeune, Hammocks Beach State Park and other beaches at Emerald Isle.  One of the main attractions for Hubert is its proximity to Camp Lejeune’s back gate on Hwy 172.  This can cut commuting time to Camp Lejuene and Court House Bay tremendously.  Homes here have no city property taxes.  Click here for more information on Hubert NC.

Swansboro, better known as the "Friendly City by the Sea", is a charming, seaside community.  It is adjacent to the Intracoastal Waterway (ICW) and White Oak River.  Swansboro historic, waterfront downtown offers dining, antique shops, arts and crafts stores.  In October the town comes alive with the sights and sounds of the annual Mullet Festival.  It is the home of Hammocks Beach State Park, a largely unspoiled area, including Bear Island, which can only be reached by ferry or private boat.  Click here for more information on Swansboro NC.

Sneads Ferry, known for its annual Shrimp Festival, is an quaint seafood village and located along the New River just south of Camp Lejeune and on the mainland side of the intracoastal waterway near North Topsail Beach.  If you enjoy living near the water where natural beauty meets small town charm, this is the place for you.  Sneads Ferry is one of the towns adjacent to Camp Lejeune which residents enjoy a quick commute to Camp Lejeune and Stone Bay using the Sneads Ferry back gate on Hwy 172.   Homes here have no city property tax.  Click here for more information on Sneads Ferry NC.

Holly Ridge is a small town on Hwy 17 going toward Wilmington.  It was home of Camp Davis which once tested missiles, but now it only has airstrip for practice.  This town was also once considered as a possible site for the U.S Space Program but the missile project that evolved into the space program moved to Florida.  Click here for more information on Holly Ridge NC.

Maysville is a small town that is located between Jacksonville and New Bern.

These neighborhoods are located just outside of Richlands and approximately 28 miles to Camp Lejeune and 23 miles to MCAS New River.

Topsail Beach North is located on Stump Sound in Onslow County.  The northern most tip of North Topsail Beach, where New River meets the ocean, is a popular spot for fishing.  The town also has one fishing pier and three beach accesses.

Carteret County, next door to Onslow County, represents 1,341 square mile including land and water of North Carolina’s Crystal Coast.  The salty breeze, quaint towns, and beautiful beaches attracts visitors from all over the world.  The major attractions are the NC Aquarium, Fort Macon State Park (a Civil War fort), The NC Maritime Museum in Beaufort (for those interested in historical shipwrecks along the NC coast), and Cape Lookout Lighthouse.